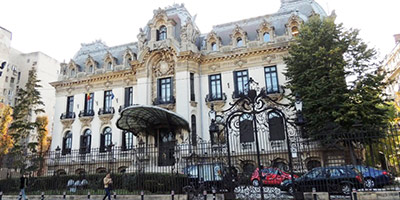 “George Enescu” National Museum was opened in the Cantacuzino Palace, one of the most beautiful buildings in Bucharest.

Built in 1901 – 1902, by Gheorghe Grigore Cantacuzino, known as “The Nabob” (former mayor of Bucharest, leader of the Conservative Party), the architectural ensemble was designed by the architect Ioan D. Berindei. For the decoration of the building, the architect collaborated with several recognized artists of the time. The mural paintings were made by G.D. Mirea, Nicolae Vermont, Costin Petrescu and Arthur Verona, the sculptures and the ornamentations are made by Emil Wilhelm Becker, while the artfulness of Krieger House in Paris can be admire in the interior decoration (tapestry, chandeliers, lamps, stained-glasses).

The façade’s richness in sculptural decoration is notable. On the top of the entrance, the circular fronton bears the princely coat of arms of the Cantacuzino family.

After the death of “The Nabob”, in 1913, the palace was inherited by his son, Mihail G. Cantacuzino and his wife, Maria (also known as princess Maruca, born Rosetti-Tescanu); after the premature death of her first husband, Maruca married George Enescu in 1937. The couple lived in 1945-1946 in the house near the palace, which was initially an administrative building.

In the 40’s, the palace hosted the Presidency of the Council of Ministers and since 1947 the Institute for Romanian-Soviet Studies. After the death of George Enescu, in 1955, his wife donated the domain to the Museum, to be dedicated to the memory of the musician. Thus, on the 19th of June 1956, “George Enescu” Museum was opened.

Since 2007, the Cantacuzino Palace is a European Heritage Label monument.

The permanent exhibition of the museum is organized in three of the palace’s rooms and displays, chronologically, objects that bear witness of an impressive biography: photographs, manuscripts, musical instruments, documents and objects related to the life and work of the musician.

Situated in an exceptional location, “George Enescu” National Museum has both a historic and a cultural value. The museum’s heritage makes possible the recover the story of a life and career dedicated to music.