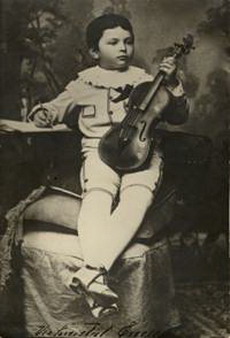 Considered to be a wonder-child, little Jurjac (the pet-name given by his family and the close ones), as early as the age of five, dreamt to be a composer: “It’s odd though: I never knew anything, I never listened to anything or to very little, I never had anyone near me who could influence me.  And still, as a child, I had a definite idea about being a composer. Just a composer“, George Enescu said later to Bernard Gavoty, a music critic and a radio journalist.

At the age of 3, he had one of those decisive musical experiences when he heard, by accident and for the first time, some fiddlers playing near to his native village. Impressed by what he heard, the child tried to imitate the instruments of the folk music band the very next day: the violin was a “thread sewn on a piece of wood” (G. Enescu in B. Gavoty, George Enescu´s Memoires), the cembalo was a couple of wooden sticks, and he imitated the reed pipe by blowing through his lips. 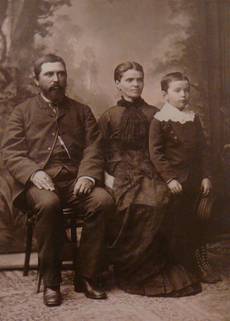 He receives his first musical notions from his father at the age of 4. As they noticed his preoccupation with the art of sounds, his parents give the little musician a small violin with three strings. He gets upset because he isn’t taken seriously and given a real violin and throws the toy into the fire. Only after he receives the violin he dreamt of, so much, he starts playing by ear, on a single string, with one finger, the songs he heard in the village.

In 1886, Eduard Caudella, who was a composer and a professor at the Conservatoire in Iasi, noticed George Enescu’s special talent and advised his parents to direct him towards musical studies. Proofs of his first attempts at composition are dated 1887, the next year, when Enescu (born August 19, 1881 in Liveni-Varnav (now George Enescu town, Dorohoi county) was only six years old.

Between 1888 and 1894, George Enescu was studying at the Vienna Conservatoire with renowned professors of the time, such as Siegmund Bachrich and Josef Hellmesberger Junior (violin), Ernst Ludwig (piano) and Robert Fuchs (harmony, counterpoint and composition). 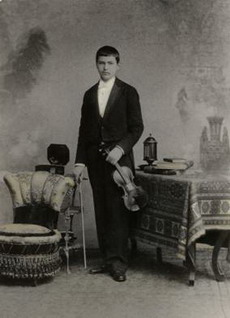 At the recommendation of Josef Hellmesberger, violin professor and the son of the director of Vienna Conservatoire, George Enescu was sent by his father to study in Paris. Thus, he studied at the Paris Conservatoire (1895 – 1899) under the guidance of professors Martin-Pierre-Joseph Marsick and Jose White for violin, Jules Massenet and Gabriel Fauré for composition, Ambroise Thomas and Theodore Dubois for harmony, and André Gédalge for counterpoint.

Although, what he wanted most was to compose music and not to become a virtuoso violin player, the studies, the perseverance and the participation in violin competitions at the Conservatoire in Paris brought Enescu a second prize in 1898 and, a year later, the first prize – with which he graduated on July 24th, 1899 the violin class at the Conservatoire in Paris; and he was offered a precious Bernardel violin with his name engraved on it, on this occasion.

However, even then, I wasn’t thinking too much about violin. I was drunk with music and not with giving performance on an instrument. I dreamt only about composing, composing, and again composing. (…) As I remember those happy times, I smile to myself. Sure, to master my quill and exercise my spirit, I wrote a lot – it is true – but I dare say that everything came from the bottom of my heart! 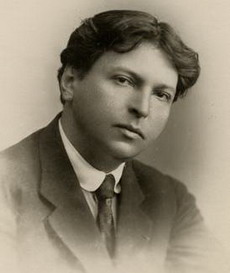 As a performer, he founded and conducted two instrumental music ensembles in Paris: a piano trio (in 1902) and a string quartet (in 1904).  He played in Germany, Hungary, Spain, Portugal, Great Britain and the USA.

The best known Enescu’s compositions date back to the first years of the 20th century. Among those there are  the two Romanian Rhapsodies (1901-1902), Suite no. 1 for orchestra in C major, Op. 9 (composed in 1903 and firstly performed  in 1911 by the New York Philharmonic Orchestra under the baton of the renowned composer and conductor Gustav Mahler), and Symphony in E flat major, Op. 13, no. 1 (1905).

In 1913, he created and paid from his own money the George Enescu National Composition Award, which was given annually until 1946. This composition competition was organized to encourage Romanian creation and offered the winners, alongside generous amounts of money, the opportunity of having their works interpreted in a concert. George Enescu was also the founder (in 1920) and the president (from 1920 till 1948) of the Romanian Composers’ Society in Bucharest. 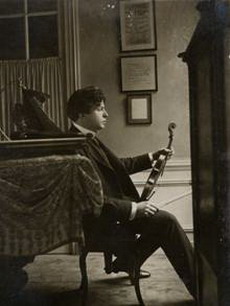 During World War I, together to his creative activity, Enescu gave concerts in Romania for the wounded in hospitals. After the war, he resumed his tours as a violinist and conductor in Switzerland, France, Holland, Spain, USA, Portugal, Canada etc.

Enescu was often invited at the Peleș Castle by Queen Elisabeth of Romania (whose pen-name was Carmen Sylva) to give concerts and violin recitals. A series of songs in German are the result of the artistic collaboration between Enescu, the composer, and the Queen, the author.

His most beloved composition, the one he worked on for more than 10 years, is the opera Oedipe, Op. 23. Finished in 1931, it was dedicated to Maria Rosetti-Cantacuzino, the woman who became, in 1937, George Enescu’s wife.

They were followed by Sonata for piano and cello in C major, Op. 26 no. 2, dedicated to the great cello player Pablo Casals, Pastoral Suite in D major, Op. 27 (1939), two unfinished symphonies (reconstituted and orchestrated by composer Pascal Bentoiu), String Quartet in G major, Op. 22 no. 2 (1951), Chamber Symphony for 12 solo instruments, Op. 33 (1954), and Vox Maris, Op. 31, symphonic poem for mixed choir with tenor and soprano solo and a great orchestra (1954). 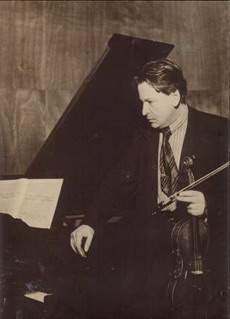 Yehudi Menuhin, Christian Ferras, Ivry Gitlis, Ida Haendel and Arthur Grumiaux are just some of the most known violinists who improved their performing art under the guidance of George Enescu.

Among the distinctions that were given to him as a sign of appreciation and acknowledgement there were: the titles of Officer and Chevalier of French Legion of Honor (1913, 1936), Honorary Member (1916) and Active Member (1933) of the Romanian Academy in Bucharest, Correspondent Member of the Fine Arts Academy in Paris (1929), National Academy of Santa Cecilia in Rome (1931), Institute of France in Paris (1936), and Arts and Sciences Academy in Prague (1937). 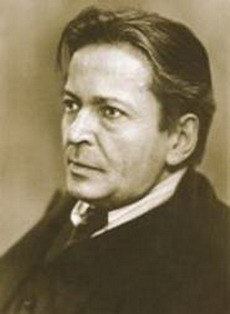 During the period that followed World War II, George Enescu leaves Romania and settles in Paris, where he died in 1955.

The memory of the great Romanian musician is revived by the International Festival that bears his name, as well as by symposiums taking place in Romania and abroad and, not in the least, by the specialized writings, the exhibitions, and the concerts organized by  “George Enescu” National Museum in Bucharest.

George Enescu, the composer, the conductor, the piano, the violin player and the professor (1881 – 1955) goes down in history as one of the most remarkable men of culture of the 20th century; he played a prominent part as a music ambassador both in his country and worldwide. He also involved himself actively in promoting Romanian music, composers, conductors and performers internationally.

Being a romantic and classical by instinct, I strived to keep, in all my works, a kind of balance that has its inner definite line.