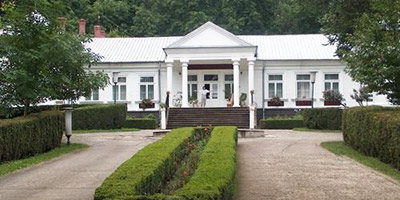 “Dumitru and Alice Rosetti-Tescanu - George Enescu” Department was opened in the former manor house of the Romanian boyars family Rosetti-Tescanu, a mansion which is today an historical monument. The edifice was built in 1880, in a beautiful dendrological park, situated in a hilly region, 37 km from the town of Bacau, near Tescani village.

After meeting Maruca Cantacuzino (born Rosetti-Tescanu) in 1909, who was going to become his wife, in 1937, George Enescu often visited Tescani, attracted by the beauty of the landscape. It was in Tescani that he completed his lyrical masterpiece, the opera “Oedipe”, which he dedicated to Maruca.

In 1947, Maruca Cantacuzino-Enescu donated her family mansion to the Romanian state; the manor became a cultural institution. In 1980, “Rosetti - Enescu” Memorial House was opened in the main building. In 1990 and in 1993, the institution was renamed Tescani Cultural Center and “Rosetti-Tescanu – George Enescu” Cultural Center.

Since 2006, the memorial house in Tescani is a branch of “George Enescu” National Museum.

The residence is a big one; it has a church, a library, a hall for concerts, a hall for conferences, a pension with 35 places and a kitchen. The residence is surrounded by a big forest with large places for cultivating grapes, apples, and plums. From the edifice we can have a wonderful view of the village. The small Orthodox Church and the residence come in contrast with the life of the inhabitants, which is mainly a peasantly one. The houses from the village have different architectural styles: either old farm style or rather ‘rustic’ or new ones with flashy colors. It is really interesting to have a walk through the houses of the village in order to understand the atmosphere of the former time.

The residence is white, in a calm atmosphere, the style is much more refined and it hosts during summer some artists who mainly belong to the contemporary art. It is quite strange to find a place for contemporary art in a village which is still keeping an old farm style. The refined interior of the residence with his classical furniture, his paintings, his bedrooms with a wooden carved furniture expresses very well the Rosetti-Tescanu’s  high class society time - a time of refinement. All the 33 hectares of the residency, the forests and the surroundings belonged to the family who was a rich family of Boyars – Boieri, and invited a lot of artists. Dumitru Rosetti-Tescanu (1852-1897), the former owner, was a famous intelestual and a political man; he was born in Paris and he came to Rumania with his mother Eufrosina Romalo. He became the prefect of Bacău county in 1888 and bought a law firm before marrying Alice Jora (Costache Negri’s niece). He was very well educated, he was austere, had a rich library and a distillery. He knew the Queen Marie, Georgeta and Mircea Cancicov, Octavian Tăslăoanu, Nae Ionescu, Grigore Tăbăcaru, Octav Onicescu, Constantin Brăiloiu, Alfred Alessandrescu, Traian Săvulescu, Felix Aderca, Alice Voinescu and the composers Mihail Jora, George Enescu. Dumitru had two daughters: Maria who married George Enescu, the great Rumanian composer and Nellie who married Maximilian Costin. The family was really concerned with culture and it still is in our days.

For the visitors and the artists, the residence offers a rich museum inside the wall of the edifice, which presents the will of George Enescu, his life and his wife’s life, the family tree of the family Rosetti-Tescani, the rooms of the family and the room of their friend Mihail Jora (1891-1971), a great Romanian-Armenian composer. The residence organizes several concerts in the museum and it offers pension services with several bedrooms - the number 1 and 2 belonged to Maruca and George Enescu. We shouldn’t forget to underline the conviviality of the museums’ staff and the cookers who cook very well, and propose some Romanian specialties such as Sarmale, Ţuică, Mămăligă.

Therefore, we advise you to go and visit Tescani, to enjoy the environment, the history, the atmosphere of an artistic location, the dormitory and as well our great cookers!