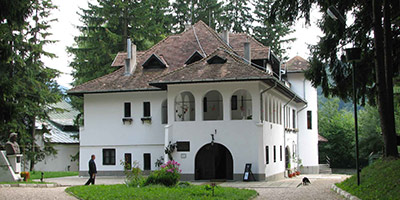 George Enescu’s connection with the Royal House of Romania started in 1898, following the success of “The Romanian Poem” Enescu’s first opus, which ended with the Royal Anthem.  The artist benefited from the support of Queen Elisabeta, also known as Carmen Sylva – her pseudonym as an artist. The queen, acknowledging the talent of the young musician, offered him a room, at his disposal, in the Peles Castle, a place where he could study. Also, Enescu was often invited by the queen to play in recitals at the Palace.

The beauty of the place and the proximity of the Peles Castle made the musician building a house here, in 1923-1926, with the money he had earned during his first tour in America; the house followed the plan designed by the musician himself, with the aid of architect Radu Dudescu and it was named “Luminiş” Villa (“Glade” Villa). The following 20 years, until 1946 when he definitively left Romania, the musician constantly return to Sinaia, to spend a least one month a year – a time dedicated to composition, between his tours in Europe and North America. In 1947, Enescu, who was living in Paris, donated the villa to the Romanian state, to be used as a place of creation and recreation for artists. In 1995, the villa was opened as “George Enescu” Memorial House and since 2007 it has become a department of “George Enescu” National Museum.

At the entrance of the villa there is a marble bust of George Enescu, made by the Romanian sculptor Ion Irimescu who was fascinated with the personality of the musician.

The upper floor rooms are large and comfortable, the furniture and the decoration expressing refinement and inspiration. The Romanian traditional style, the oriental style and the Bidermayer style are harmoniously and originally reunited, in the ornamental elements and in the pieces of furniture. Many valuable objects in crystal, china, metal and ceramics bring glamour to the interiors.

In the living room there is the maestro’s piano, an Ibach made in Lausanne, the instrument Enescu used for composing and playing for close friends and family. From the living room, a spiral staircase leads to the Belvedere tour and from here to the attic or “bageaga”, as Enescu used to call it. Also from the living room the artist’s wife’s room is accessible – a room eclectically decorated. George Enescu’s room stands out by the intimate atmosphere, proving his well-known modesty. “The cell” is rather small; the furniture is in authentic Romanian style. This was the artist’s favorite place for rest, after his numerous concerts.

The attic floor was added by the architect Radu Dudescu, in order to bring equilibrium to the tour’s verticality within the villa’s ensemble. In the two rooms documentary material on the life and work of the musician is exhibited.